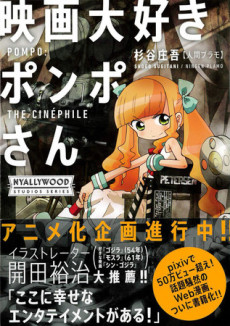 The manga depicts the craft of movie-making and revolves around Joelle Davidovich "Pompo" Pomponette, a talented movie producer who looks like a girl.

Operating out of the movie capital "Nyallywood," Pompo has been shooting one B-grade entertainment flick after another that anyone would enjoy. One day, Pompo's "movie buff" assistant Gene spots a new script written by Pompo, and is moved by its exquisite story. In a fit of passion, he proclaims, "I want to see this as a finished work in theaters as soon as possible!"

However, Pompo tells him, "So you shoot this film." Thus, Gene takes on his first directing gig. Meanwhile, Natalie, an ordinary girl who just arrived in town with movie actress dreams, has been discovered by Pompo.