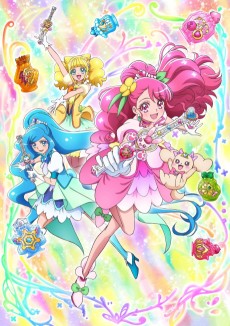 Deep inside the Earth lies a magical place called the "Healing Garden", which cared for the planet for centuries and is been protected by animal-like fairies named "Healing Animals". However, the garden was attacked by the antagonistic group called Bjögens whose goal is to infect the garden and slowly poison the planet. In order to save the Healing Garden, Latte escaped to the human world alongside three "medical trainee" Healing Animals, on a mission to find three people who can partner with them. After they meet Nodoka, Chiyu and Hinata, Latte pleaded them to fight for the Healing Garden as they became Pretty Cures in order to fight against the threat of the Bjögens and protect all life on Earth and the Healing Garden.