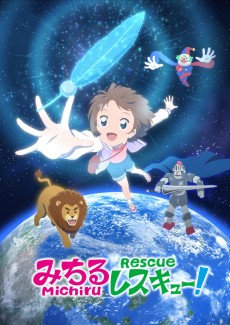 Four glowing orbs of different color fly through space, chasing after a dark red orb. After a fierce battle, only the blue orb falls to earth, into the room where Michiru is sleeping. But the dark red orb also appears on earth. The orb changes shape into the form of a boy, and starts to illegally raise Mejiro birds. Later, Michiru is at a flea market in a park, when a large flock of Mejiro birds cover the sky, and start attacking people. The yellow, silver, and purple orbs show up and almost manage to calm down the Mejiro, but violence is about to break out again. At that moment, Michiru hears a voice inside her head asking her to save the Mejiro.