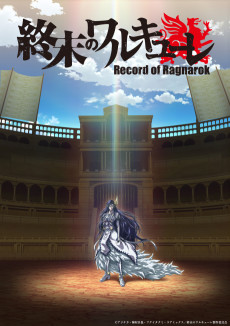 7 million years of human civilization is coming to an end…

Every thousand years, all the gods of the world gather in heaven to attend the Conference of Mankind Survival. The gods agree to end to mankind due to their foolish acts, but before the final verdict is made, Brunhild, the eldest of the 13 valkyrie sisters, makes an objection.

“To spice things up, why don’t you test the humans?”

She proposes that the all-powerful gods face off in one-on-one battles against the strongest champions from human history — during a final struggle known as “Ragnarok.” The first team to win 7 out of 13 battles will be declared the winner, but it seems almost impossible for humans to win against the gods.

Although the gods sneer at her declaration, Brunhild provokes them further:

“Are you chickening out?”

Her words hit the gods’ nerves, and, enraged, they accept her proposal. Now, Brunhild and her sisters must choose humanity’s 13 champions in a desperate battle for survival. Will humans surpass gods and prevent humanity’s ultimate end? The eschatological battles between heaven and earth finally begins!